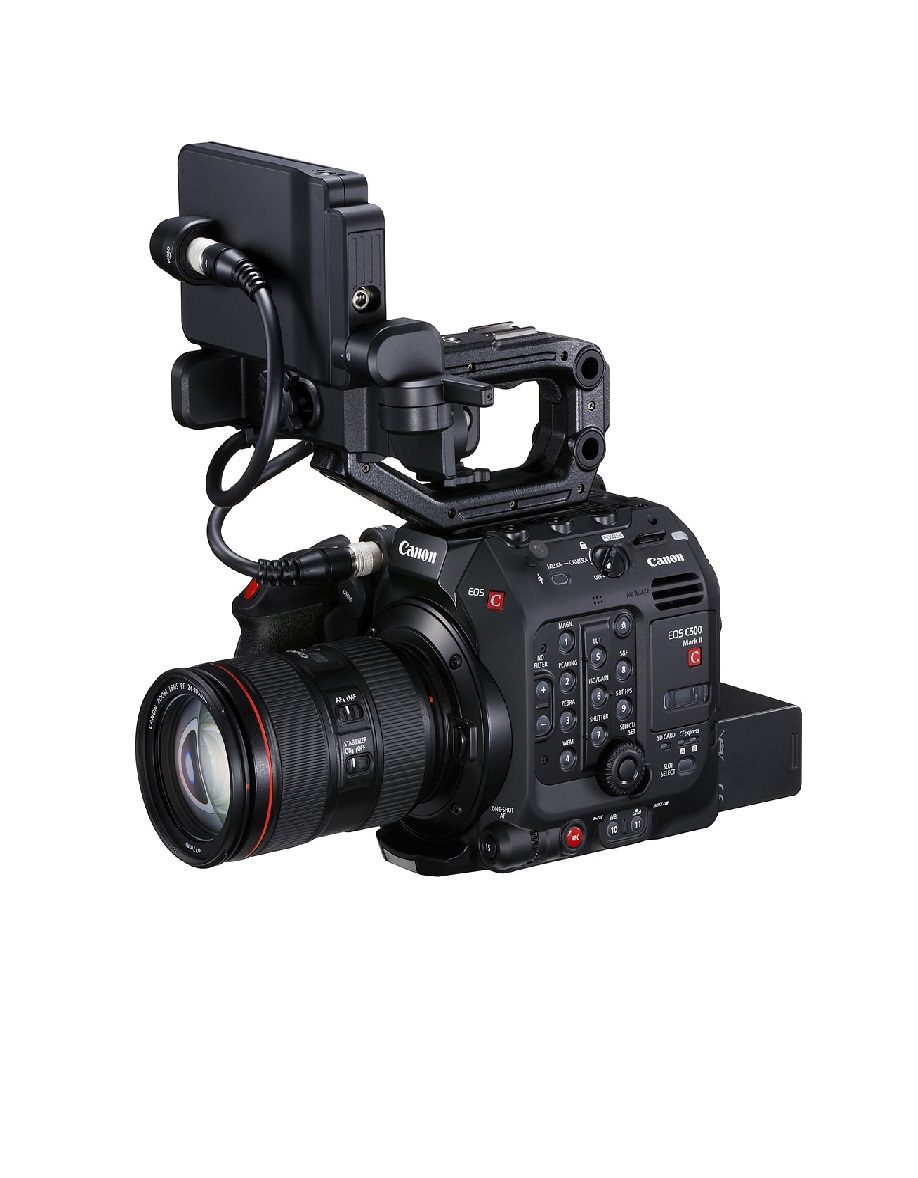 Note that a package including Expansion II module and EVF is also available.

The Canon C500 Mk II uses the same sensor as the Canon C700 FF, built into a versatile, modular compact form factor camcorder which is shorter than the C300 Mk II and body weighting just 1.75kg (without battery).  It can be used in a cut-down format to make it suitable for gimbal and drone use or instead can be built up into a fully-featured shoulder-mounted camera complete with full ARRI kit and professional viewfinder.

It can be supplied with a choice of native PL or EF mount and will record 4K+ images either in 16:9 or anamorphic formats.

Canon’s Dual Pixel CMOS AF Technology function really has to be seen to be appreciated.  There are many AF modes which can allow the user to totally avoid the feared ‘focus hunt’.

It records up to 5.9K images to internal CF Express (same form factor as XQD cards).

15 stops of dynamic range is available when shooting with either the Canon Log2 gamma curve or in Cinema Raw Light, making it ideally suited to capturing HDR video content and the camera is able to record oversampled 4K video internally, which should provide superior results to using a native 4K only sensor.

Users can also capture footage internally using Canon’s own XF-AVC codec. Unlike its big brother the Canon C700, the Canon C500 II can only capture Cinema Raw Light to internal cards and not the full RAW format, though the quality is excellent  This efficient codec also benefits the user to be able to benefit from long record times (up to 50 mins of 25p in 5.9K Cinema Raw Light on single 512GB CFExpress card).   THe C500 Mk II is also compatible with original Canon log, Canon Log 2 or Canon Log 3 if preferred.

All acquisition formats possible including Anamorphic and Full Frame

The new Canon-developed full frame sensor used in the C500 II and C700 FF has a native resolution of 5952 x 3140 pixels, providing a 17:9 cinema-friendly aspect ratio, and has an imaging area of 38.1×20.1mm in size, making this both a bit wider and a bit shorter than a standard full frame sensor.  However, this is smart, since it achieves the same image circle size as a full frame DSLR, meaning the C500 II FF is compatible with Canon’s entire line of EF-mount lenses at their standard focal lengths.

The VMI C500 II Kit includes a touch-screen 4.3-inch LCD monitor as standard but VMI are offering the superb OLED Electronic Viewfinder EVF-V704 as a low-cost option and which totally converts this camera into a totally functional professional shoulder-mount camera.

Hard to believe but not only will the Canon C500 II stabilise images with suitable EF lenses but it has a function to perform a small digital zoom and offer digital image stabilisation of non-stabilising lenses including PL mount lenses.

We are also including the ARRI Pro Set to allow standard film accessories to be fitted. The ergonomic grip design for easy handling and operability, making it ideal for single shooter operation.

Up to 4 audio channels

Surprisingly few cameras incorporate a 4K output but the C500 II outputs 4K both via the HDMI output and also via a configurable 12G HD-SDI output, so 4K will not need 4 x separate cables.

Output 12G 4K video from a single SDI Cable.
*** Note that the SDI output mirrors the record standard, so if recording in 4K, then the SDI is also 4K.  HD output only possible if used in conjunction with the Expansion II module***

Not usually seen in a camera at this level, the Canon C500 II users can customize their own LUTs and load them onto the camera for precise-look monitoring, also, users can apply different LUTs for each output terminal.

Additionally, video output from the camera can be monitored by selecting the ACES Proxy.

VMI kits are supplied with 3 x 512GB CF Express cards.  This card format can provide a sustained data rate of up to 1700 Mb/s.

Email Phone
We use cookies to ensure that we give you the best experience on our website.
← Back to login
Close filters
Filters